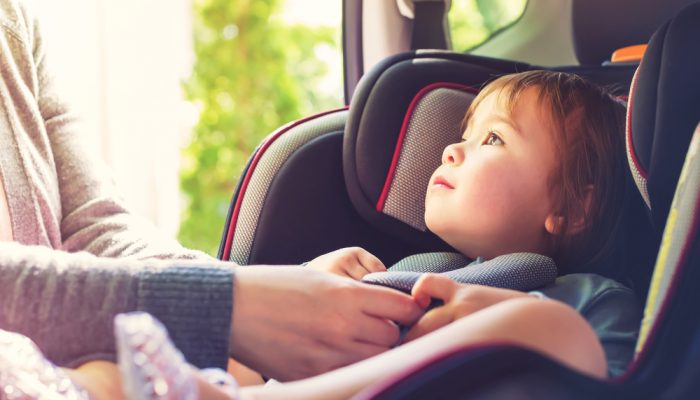 The American Academy of Pediatrics (AAP) recently published an updated policy statement regarding the transportation of children in vehicles. AAP now recommends children remain in a rear-facing car safety seat as long as possible, until they reach the highest rear-facing weight or height allowed by their child seat. Prior to this latest change, AAP recommended children should remain rear-facing until age 2. This change has resulted in confusion for parents that can be seen in social media comments and responses. These comments question if rear-facing is safer, the ability to fit a child seat for a larger child in cars, where the larger children will put their legs and when it is OK to turn a child forward facing. AAP’s recommendations are aimed at increasing the safety of children being transported and are supported by the science of occupant protection. Simply stated, we would all be safer if we could ride rear-facing, be in on a plane, train or automobile.

There are a few places where you will see occupants riding facing rearward. Many of the cabin crew seats on aircraft face the rear of the aircraft. Also, many military aircraft have “ditching stations” where the occupants would sit facing the rear of the aircraft, with their back against a bulkhead (wall). These rear-facing seats, like rear-facing child seats, all provide support for head, neck and spine of occupants, as opposed to trying to restrain the occupant’s head solely with their neck and thereby decreases the risk for a neck injury.

Occupants have an overall increased tolerance to crash forces when seated rear-facing and fully supported. This is especially true for young children whose heads are larger in proportion to their bodies and their necks have not fully developed. There was also a study that looked at the safety of rear-facing children versus forward facing children in real world crashes. The researchers concluded there was a substantial increase in safety for children between one and two years old when they were positioned rear facing. Since the time the study was published there has been additional analysis of the data. While the data still indicates rear-facing to be safer, the injury numbers are too low to be “statistically significant”. There has not been any data to indicate rear-facing children are at any increased risk of injury than their forward-facing counterparts.

Similarly, with the 2018 recommendations, it is expected child seat manufacturers will likewise respond with new products designed to allow children to ride rear-facing longer. Likely these new designs will include features to provide for the ability to install these larger seats in vehicles and increase comfort for children with longer legs.

Data from real world crashes with children rear-facing shows a very low occurrence of leg injuries in crashes. While there is always a risk a rear-facing child could sustain a leg injury, the injuries seen are typically recoverable. This is in contrast to the type of serious head and neck injuries seen in crashes with forward-facing children that have lasting effects. Many parents have concerns about where larger children will put their legs when rear-facing. Experience shows children will find a comfortable way to sit. It might not look comfortable to an adult, and neither do many of the positions children sit or sleep in.

Some of the comments seen on social media point out that when a car is impacted from the rear, a rear-facing child is in a frontal crash. From the pure direction of the forces, this is true; however, there are many other factors that need to be considered. First, frontal crashes occur more frequently then rear impacts and are frequently of higher severity. Many rear impacts occur at relatively low speeds, when the front vehicle is stopped or stopping. Any forward velocity the front vehicle has, reduces the closure speed between the two vehicles. When frontal crashes are considered, many of these involve crashes with fixed objects or approaching vehicles. In both cases, there is no reduction in closure speed as seen in the impact to the rear of a vehicle.

An important point in the latest AAP recommendations is that it removes the age criteria from the decision of when to turn a child forward-facing and focuses on the height and weight of the child. For nearly the past twenty years, the criteria for when to turn a child forward facing has been based on the age of the child. However, changing to a height and weight-based criteria will likely result in children remaining rear-facing longer. The recommendation still refers back to the height and weight limits of a child seat as specified by the seat manufacturer. The new recommendation should eliminate some confusion for parents of what to do when a child meets the age requirement but is still within the allowable height and weight limits for the child seat. Likewise, parents should more clearly understand that once the child has reached a manufacturer’s height or weight limit, they should either turn the child seat forward-facing or purchase a new seat suitable for their child’s size.

The key take-away for all parents and caregivers to remember is that AAP recommendations are based on the best science and occupant protection information available. They are made with the goal of increasing the safety of child passenger transportation and protecting children who are involved in serious crashes. The goal of these new recommendations is to offer the child the greatest protection in the largest number of crashes.

The AAP policy statement can be found at:
https://www.aap.org/en-us/about-the-aap/aap-press-room/pages/aap-updates-recommendations-on-car-seats-for-children.aspx

2 thoughts on “Latest Recommendation for Children in Child Seats”